Many people find interest in old globes and some decide to start Collecting Antique Globes. This article is meant to be a starting guide for those who want to start collecting.

The oldest terrestrial globe dates back to 1492 when circumnavigation of the world by Spanish and Portuguese explorers was at its height. Because of how expensive and challenging they were to make, old-world globes were precious and held in the utmost respect. As such, they were almost exclusively in the hands of Kings and noble families.

During those times, owning a globe meant that you had power over the known lands and that you understood the intricacies of world geography—that, in turn, meant having a cultured upbringing only money and power could buy. A globe was perhaps one of the ultimate status symbols of the day. 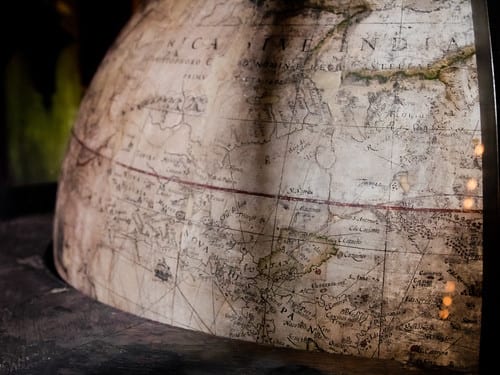 As the years, decades, and centuries rolled on by, globes would become more widely available, though they are still held in high reverence. These old world globes that have made their way into the present give us a glimpse into a bygone era, a snapshot of how people saw the world as it was, or to be more precise, how it was known to them.

Collectors of antique globes know that really fine globes are far and few between, which is why care should be taken when collecting them.

Here’s a look at what a collector looks at when examining an antique globe.

Condition is perhaps the most important factor to consider not just in antique globes, but antiques in general. No antique globe is free of minor defects like scratches and small discoloration patches, so expect these issues. You should lookout for signs that the globe has been badly damaged; look for dents and major cracks.  Difference between

The globe’s stand should also be in good shape. Oftentimes, the stand will be the difference between an ordinary globe and one that’s actually extraordinary.

After condition, see if you can determine who the maker of the globe was. The Dutch Republic pioneered the commercial manufacturing of the globes, which took place in the late 15th century, eventually spreading out to the rest of Europe and, centuries later, America. Italian globes in the 16th century made a name for themselves for their decorative flair, while France’s Royal Cartographers made globes for King Louis XIV in the 17th century.

Ultimate Globes has a guide on how to date your globe, complete with a chart containing dates of globe production, along with their corresponding countries and manufacturers.