In this article, we will describe how the light or illuminated feature works on a world globe that includes it and the pros and cons of having an illuminated globe.

What makes the globe light up?

The lighting in a globe is fairly basic in its makeup, and in almost every globe style that contains illumination the same methodology to achieve it, is used. Just about every globe is connected to its stand by the use of a meridian. Some meridians encircle the entire globe while others may only cover half the globe, which is called a semi-meridian. Either way, the meridian is always attached at the north and south poles of a globe and typically angled to depict the natural earth axis of 23.5 degrees. This mounting allows the globe to spin left or right.

The globes south pole attachment is the location of the light kit on the inside of the globe. There are two types of housings for the light, the most common being a light socket, just as you would find in a household light fixture and is where the light bulb would be accessed. The second is a hardwired LED mechanism where the LEDs used to illuminate are all part of the kit and not expected to burn out, so changing out this type is not a concern.

Most manufacturers are working towards full LED mechanisms so that changing the bulb would no longer be a concern. While it is our goal to try and point this out to you on the product information pages of a globe you may consider buying, manufacturers are always working on trying to enhance their designs, and keeping up with it can sometimes prove to be a challenge. If this is a concern for you, reach out to our customer support group for additional information.

How is the light-powered?

Illumination is powered in one of a couple of ways, either battery, standard wall cord or a USB cord that can be plugged into a computer or USB wall adaptor (not always included).

For the most part, globes will come with a cord unless otherwise noted, but keep in mind, most manufacturers do not provide images of globes with the cord. Most commonly, the power cord will exit the south pole, as previously indicated.

The challenge with the use of batteries has been how long the globe should remain illuminated when switched on. Some customers have complained that their battery-powered globe won’t stay on longer than 15 minutes due to an auto shut off designed to preserve battery life. When using your globe as a backlight in a room, automatically turning off every 15 minutes doesn’t always provide the desired effect.

Globes wired for the U.S. market are wired for 120v standard outlets and electric circuits.

How do you change a light bulb?

On just about every globe, the way to change the light bulb is the same. Referring back to how globes are mounted, we understand the light kit is located internally at the south pole, so we need to expose the light kit to change the bulb. For your safety and altho it goes without saying, it is critical to make sure your globe is not plugged into the wall while attempting this task.

Where the globe is attached at the north pole and on the outside of the meridian where it is attached you will find one of three methods to disengage the meridian from the top of the globe, they are as follows:

To follow are a couple of illustrations on how a meridian on a desk globe can be detached. Be sure to consult your manufacturer’s methods to make sure it is handled correctly. 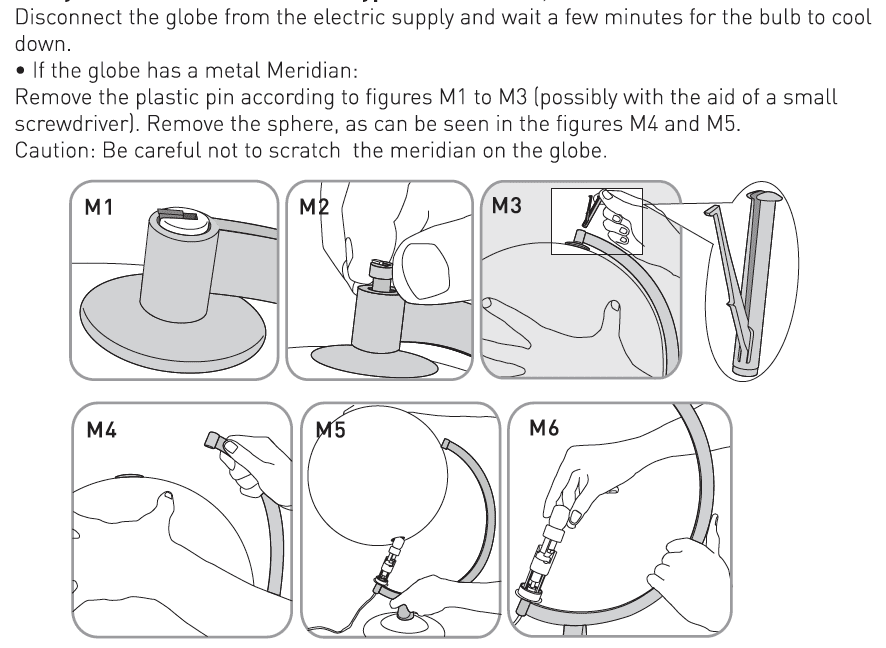 Once the tab, screw, or in the case of some plastic meridians you have pulled the meridian up, gently move the globe away left or right of the meridian so as not to scratch the surface of the globe. Once enough space is available you will be able to pull the globe up and slightly away from the meridian to expose the light kit.

It is important to not exceed the manufacturer’s suggested wattage for a globe. Doing so can damage the globe and potentially lead to a fire. We suggest if your globe has a filament style bulb, you replace it with an LED equivalent. It will give off less heat and perhaps even last a bit longer.

Illuminated globes have quite a bit to offer. Many kids globes come with this feature making them great night lights, while customers with decorative globes like sometimes to place their globe on a timer and use it as a programmable backlight in a room.

In addition, some customers feel that the illumination makes the globe easier to read and globes with dual map cartography actually expose additional detail you might not find on a non-illuminated globe.

However, when deciding if the illumination is right for you, it comes down to your intended purpose for purchasing the globe. Some globe styles only come with illumination, so if you prefer the style, it may be your only option.

What are the drawbacks of an illuminated globe?

There is one main drawback to illuminated globes. To light them up, they must have a power source. Perhaps you want your large floor standing globe as a feature in a prominent area such as a waiting room, conference room, den, or classroom where running a cord to the wall is an inconvenience or maybe not even a possibility. If this is the case, you might want to stay focused on a non-illuminated globe.

If you have settled on a certain style and you do not want this feature, we suggest reaching out to our customer support group, and they can research whether the globe can be made available without this feature. We have had customers inquire about simply buying a globe and cutting off the cord. We do not recommend this. Not only would this void the globes’ warranty, but most of all, it involves electrical components. We want our customers to be around for a long time to enjoy their globe.

If you would like to find out more about other features of a world globe check out our world globe features page.