In this article we have compiled a list of terms generally associated with world globes. They may reference parts of a globe, a globes manufacturing process, general geographic references and much more.

This list has been created for our customers to better understand the references we make throughout our site so that the most informed decision when buying your next globe.

The analemma is a figure 8 looking graphic commonly printed on older globes, usually in the eastern Pacific Ocean. The analemma is used for making calculations of mean time, acting as a reference point for the earths tilt. The analemma also marks the solstices and equinoxes.

A globe characterized by rings that indicate planetary orbits, zodiac constellations, celestial measurement circles, and the equator. Often mounted as garden sundials or with an orrery inside.

The axis is the rod or shaft at the center of the globe. It represents the imaginary line around which the earth rotates or spins. At the two ends of the axis are the North Pole at the top and the South Pole at the bottom.

More often seen in European globes, polar calottes are two round pieces of paper that cover the poles instead of paper gores.

The cartouche is the label on the globe that identifies that manufacturer and its location, as and sometimes the model and manufacturing date of the globe.

Celestial globes are mounted spheres that show the positions of celestial bodies in the sky (e.g. stars and zodiacs).

The cradle mount is a type of mount that allows the globe to be disengaged for closer viewing. The globe is cradled and as such, has no axis.

A unit of measurement used in globes, known as 1/360th of the circumference of a circle.

A line that passes through the globes center, measuring the diameter.

The half of the earth generally recognized as being composed of Europe, Africa, Asia, Australia, and their nearby oceans.

The great imaginary circle that runs around the earth precisely between the poles, effectively dividing the world into the Northern and Southern Hemispheres.

The band applied to the equator, working also to cover the seam of the globe.

The two events of the year, often around March 21 and September 23, when the sun’s rays are perpendicular to the Equator, resulting in day and night being of equal length all over the world.

The truest representation of the Earth; a map imprinted on an orb/round ball in the shape of the earth.

Also referred to as the Prime Meridian

It is the network of parallels and meridians on a globe.

The ring attached to many globes. This ring represents the celestial horizon, which divides the globe into the hemispheres.

Inclination of the Earth’s Axis

Also known as the earths axis tilt 23.5
The tilt of the Earths axis, which is angled at 23.5 in relation to its orbital plane.

It is the system of contour layer coloring for showing elevation on globes and maps. Green represents lower elevations, yellows medium elevations, and orange and brown for extreme elevations.

The imaginary line used as a reference to determine the beginning and end of the day. While arbitrary variations exist for local convenience, it follows the 180th meridian.

Latitude and longitude are horizontal and vertical lines that crisscross each other on maps and globes, helping establish reference points and creating a navigation system. Combine, these lines form a grid.

A reference that identifies symbols and details on globes and maps like railways, flight routes, and more.

Represented by vertical lines on globes, with the prime meridian found at 0. All meridians to the left and right are west and east respectively, and are in 15 intervals.

The metal band that encircles half or the entire globe, normally attached to the globe on both poles and the base.

The structure to which the globe is attached to and is what keeps the globe in place. See the definition of the many types of mounts (Plain Mount , Cradle mount, Stationary mount).

The half of the worlds surface situated north of the Equator.

Another word used for globe, sphere, or round ball.

The cartouches overlay, or when a label is applied to cover the original cartouche.

East-west lateral lines around the globe that are parallel to the Equator.

Also known as the zero meridian, the basis of measurement for east and west longitude. The Prime Meridian (00 longitude) runs through Greenwich and is the basis from which standard times are calculated.

The earth’s turning on its axis.

The numerical relationship between an actual distance on the earth and the distance which represents it on a map.

Either of the two points on the ecliptic at which its distance from the celestial equator is greatest and which is reached by the sun each year about june 22 and december 22.

The half of the worlds surface situated south of the Equator.

Another word used for globe, orb, or round ball.

A type of mount that keeps the sphere and full meridian affixed to the globes base.

Commonly found on most 20th century US Globes, a time dial is a thin metal circle at the top of the globe. It is divided into 24 parts, and is engraved or printed with the hours of day and night. It allows viewers to calculate the difference in time between the different time zones on the globe.

The half of the earth generally recognized as being composed of North America and South America.

An imaginary belt in the nighttime sky and divided into 12 parts, each section represented by a symbol of a constellation. 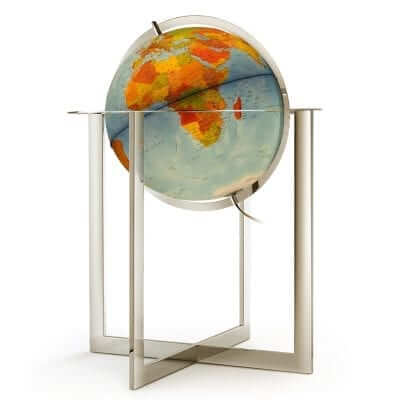 How Does an Illuminated Globe Work?

In this article, we will describe how the light or illuminated feature works on a world globe that includes it and the pros and cons [...] 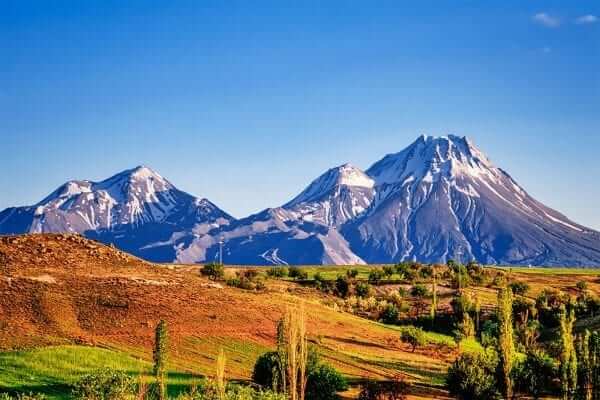 What is Raised Relief on a Globe?

In this article, we will explain what Raised Relief is, how this feature is used, and it’s overall usefulness on a world globe. [...] 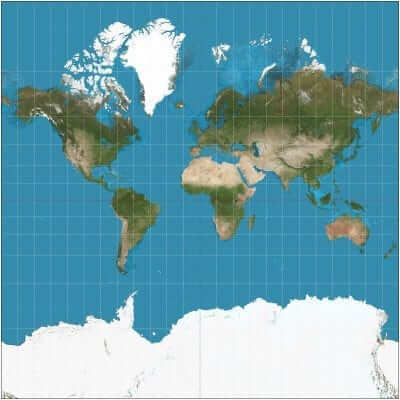 How Globes Are Made: Maps

A globe is a map in a spherical shape. You would think it’s easy to translate flat world maps onto a sphere accurately, but it’s [...]

Now that you know the way in which we reference our products and their features, start your shopping now to find just the right globe.